Exploitation of item (5) is exemplified by attempts to stoke fear of childhood vaccinations, a topic we will deal with in detail in an upcoming blog post.  But we can illustrate some of the issues briefly here by the following quotes from an article on the WebMD site:

“The MMR [measles-mumps-rubella vaccine] scare started 10 years ago with a report published in The Lancet that described the cases of eight children who, as their parents recalled, developed autistic symptoms and digestive ailments shortly after getting their first MMR dose. The researchers proposed that the vaccine might trigger a previously unknown form of regressive autism…”

“Since that initial finding, 14 studies including millions of children in several countries consistently show no significant difference in autism rates between children who got the MMR vaccine and those who didn’t.”

“But those who take issue with the scientific consensus … focus on research that seems to support their opinions. In particular, they point to the work done by Mark Geier, MD, PhD, a former researcher at the National Institutes of Health, and his son, David Geier, whose studies did show a strong link between autism and vaccines…An Institute of Medicine panel reviewed all of the evidence on vaccines and autism in 2004. But the reviewers excluded the Geier studies, finding them “uninterpretable.” The AAP issued a statement … listing 15 critical errors or omissions in just one of [the Geiers’] studies.”

It should also be noted that the original Lancet article which launched the MMR scare has long since been retracted by the journal, and the “research” by Andrew Wakefield that it reported has been found to be fraudulent.

6) Allow your objections to evolve, but not your conclusions:

Item (6) is a central part of the climate science denial blueprint.  Over the past few decades, the arguments used by climate change deniers have evolved and changed emphasis among the following:

All these arguments are easily refuted, but with no impact on deniers’ conclusions.  For example, to refute argument 4 in this list, we show below the peer-reviewed data from Antarctic ice cores showing an extremely clear and strong correlation between carbon dioxide levels and temperatures spanning nearly a million years.  In light of this correlation and the current CO2 concentration shown at the extreme right of the upper curve, there is every reason to be greatly concerned about future global temperatures. 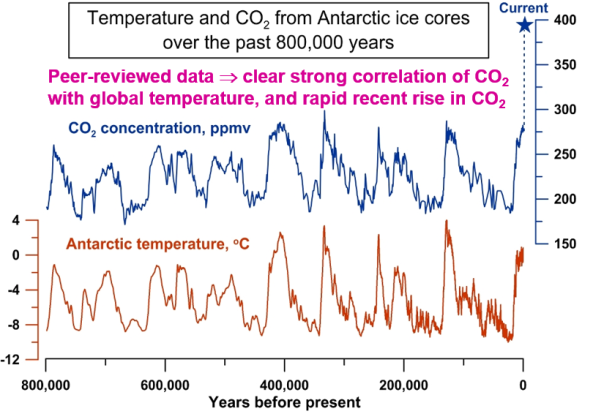 Argument 5 in the above deniers’ list is an example of including a partial truth, but hiding the full story.  CO2 levels were much higher several hundred million years ago, but: (a) the Sun was significantly weaker then; (b) there were no humans to be massively displaced; (c) rapid changes in CO2 levels, over periods too short to allow evolutionary adaptation, are harmful; (d) the latter point has a clear historical illustration from massive volcanic (so-called Large Igneous Province, or LIP) eruptions that produced rapid buildup in atmospheric concentrations of greenhouse gases (both carbon dioxide and methane) and mass extinctions of living species that populated Earth at the time of those eruptions.  The plot reproduced below shows when the fossil record indicates that those mass extinctions occurred.  The alignment of nearly all of them along the zero line in the plot indicates that they are very strongly correlated with the independently inferred times at which the massive LIP volcanic eruptions occurred.  The fact that greenhouse gas concentrations are now rising more rapidly than it did from those eruptions should hardly convince one that rapidly rising CO2 levels are of no concern!

7)  Promote your denial in “scientific-sounding” public and mass media documents:

The figure below shows the covers of some of these mass-media denial documents: books, compact disks, pamphlets.

Some of the deniers’ “research” documents may appear to be published in peer-reviewed scientific journals, but it is important to probe the reputation of the journal.  For example, the Global Warming Petition Project has solicited some 31,000 signatures from self-proclaimed scientists opposing the conclusions of the Intergovernmental Panel on Climate Change, by sending to prospective signers a “summary of peer-reviewed research” whose title, authors, abstract and journal are shown in the figure below.

Now you would be correct to wonder what a review on environmental impacts is doing in the Journal of American Physicians and Surgeons.  The answer is seeking friendly peer review for publication.  This journal is published by the American Association of Physicians and Surgeons, a conservative non-profit association founded in 1943 to “fight socialized medicine and to fight the government takeover of medicine.”  It is a journal best known for its ideologically strict but scientifically feeble peer reviews, and for publication of questionable research including, for example, the deeply flawed studies by the Geiers about potential links between vaccines and autism, referenced under the discussion of toolbox element (5) above.  When authors choose to publish in a journal with such a reputation, it is a pretty strong indication that their work would not survive a rigorous review by a reputable science journal.

Occasionally, deniers go further to simply doctor articles from reputable media to fake support for their denial.  The classic case is the widely distributed, but faked, Time Magazine cover from 1977 on the left side of the figure below, doctored to make a visual point that scientists can’t make up their minds on whether the planet is cooling or warming.  But as shown in the figure below it, the real Time cover from 2007, from which the doctored copy was generated, accompanied a story that made precisely the opposite point.  The use of fraudulent memes seems to convince some members of the unsuspecting public. 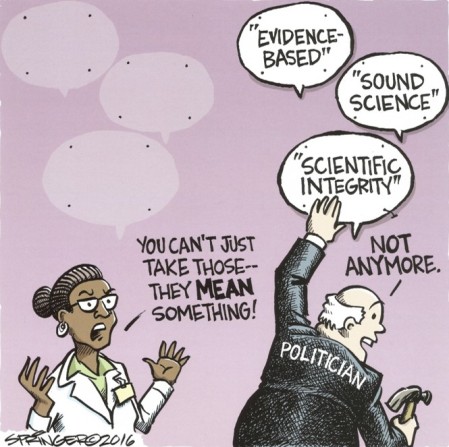 Think tanks such as the Heartland Institute are excellent examples of collections of professional science deniers who move from topic to topic.  In the past, the Heartland Institute worked with the tobacco industry, Frederick Seitz and S. Fred Singer to question links between smoking, secondhand smoke and health risks.  One of their publications was entitled “Joe Camel is Innocent!”.  They advertise themselves now as “the world’s most prominent think tank promoting skepticism about man-made climate change.”  As we will elucidate in a future blog entry dissecting their booklet “Why Scientists Disagree About Global Warming,” their promotion veers much closer to denial than to skepticism.  They currently dismiss any dangers of fracking, and they’ve written model legislation to repeal mandates promoting development of renewable energy sources.  Their leaders cut their teeth denying ozone layer depletion and acid rain.  Their “science” reflects neither expertise nor a winning (or even respectable) track record, but rather a consistent Libertarian viewpoint (“All government regulation is bad!”) with ample industrial sponsors.  Their expertise is only in exploiting the science denier’s toolbox outlined here.

Proponents of the Heartland Institute viewpoint argue that any government regulation is a step along a “slippery slope” toward tyranny.  But in fact tyranny thrives on war against facts.  As history reveals repeatedly, authoritarian governments promote ideology of any sort (Communism, Nazism, Libertarianism, etc.) over evidence as a basis for policy decisions.

“While anybody is free to approach a scientific inquiry in any fashion they choose, they cannot properly describe the methodology as scientific, if they  start with the conclusion and refuse to change it regardless of the evidence developed during the course of the investigation.”  — Judge William Overton, from his ruling against the teaching of “creation science” as science in Arkansas public schools (McLean vs. Arkansas Board of Education, 1982)

“One of the reasons for its success is that science has a built-in, error-correcting machinery at its very heart. Some may consider this an overbroad characterization, but to me every time we exercise self-criticism, every time we test against the outside world, we are doing science. When we are self-indulgent and uncritical, when we confuse hopes and facts, we slide into pseudoscience and superstition.” — Carl Sagan, The Demon-Haunted World: Science As a Candle In The Dark (Headlight Book Publishing, 1996)